5-HTP (5-hydroxy L-tryptophan) is a naturally occurring metabolite of the amino acid tryptophan. 5-HTP is converted in the brain to serotonin, a neurotransmitter substance found at the junctions (synapses) between neurons. 5-HTP helps maintain mental and emotional well-being and promotes healthy sleep. Doctors Best 5-HTP is extracted from the seeds of the Griffonia simplicifolia plant.*

Serotonin in the central nervous system is recognized as a causative factor in some depressed persons.6,7 A comprehensive review of seven open and seven controlled clinical studies found that oral consumption of 5-HTP improved mental and emotional status in 60 to 70 percent of depressed people. The results varied from "modest" to "marked."8 Dosages ranged from 50 to 300 mg daily.

A more recent randomized double-blind study compared the efficacy of oral 5-HTP (100 mg three times daily, without a decarboxylase inhibitor) to that of fluvoxamine, a selective serotonin reuptake inhibitor.10 (SSRIs block the reabsorption of serotonin by postsynaptic receptors, thus increasing the available supply of serotonin in the synaptic cleft.) The two were found to be equally effective, and 5-HTP was better tolerated. It should be noted that 5-HTP was given in the form of enteric-coated pH-sensitive capsules which dissolve in the small intestine, thus preventing conversion of 5-HTP to serotonin in the stomach.

In contrast to MAO inhibitors and SSRIs, medications which act by blocking normal physiologic functions, 5-HTP supports normal function in its role as a serotonin precursor. Correcting serotonin deficiency has been called a "functional-dimensional approach" in the treatment of depression.

Studies have shown that 5-HTP influences the quality of sleep by increasing REM (rapid eye movement) sleep. Administration of 5-HTP in the evening prior to bedtime has been shown to increase the duration of REM sleep and decrease the amount of non-REM sleep.

Suggested Use: As a dietary supplement, take 1 capsule two or three times daily, with or without food.

Not to be used when taking MAO inhibitors, selective serotonin reuptake inhibitors (SSRIs), or other anti-depressant medications. It should also not be used by individuals taking any of the category of medications known as "triptans".

Keep out of reach of children.

Note: Best 5-HTP is tested to ensure that it does not contain "Peak X"

Best 5-HTP Enhanced with Vitamins B6 and C (120 capsules) 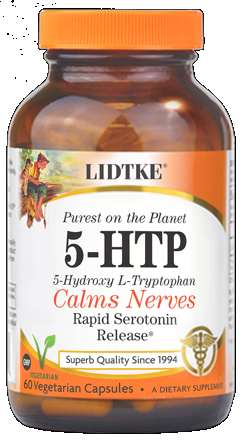 33.99
Doctor's Best
Be the first to tell us your thoughts.Add your testimonial

Asked on: January 13, 2013
Question: I am commenting on how well meiotanln has helped me. At first I was taking it for insomnia. Till I had a spinal cord injury 10 years ago. During a summer one year I forgot to bring it along. I went camping for a week without taking meiotanln. I had the worst back ache you wouldn't believe till started taking meiotanln again. Couldn't it be used as a muscle relaxer, one that isn't strong but, gentle. A thought to check into. I am a firm believer of meiotanln.

htp serotonin 5 sleep, rem depressed ssris inhibitors, griffonia review http contrast
1. Statements and claims on Seacoast.com have not been evaluated by the FDA and are not intended to treat or diagnose any ailment or disease.