Ashwagandha (Withania somnifera) is one of the most highly respected botanicals in the 5,000-year-old Ayurvedic herbal tradition of India. Classified as a rejuvenative tonic ("rasayana") in the Ayurvedic system, it is widely used in modern Western herbalism as an adaptogen - a substance that can help our bodies healthfully adapt to physiological and psychological stress, thus increasing our resistance to stressors.Planetary Formulas Ashwagandha Liquid Extract is prepared from premium ashwagandha root, organically grown and processed in accordance with the California Organic Foods Act of 1990.

A History of Traditional Use

Ashwagandha has been traditionally used throughout India for thousands of years as a rejuvenating tonic, and has been included in the writings of many Ayurvedic scholars. It was widely used to support vitality in people of all ages, including children, and to enhance reproductive function in both men and women. In one text it was stated that ashwagandha, taken with a liquid, promotes physical development and vigor "as rains do for younger crops."

In modern times, ashwagandha has been researched for its adaptogenic properties. Adaptogens are defined as substances that enhance general adaptive response. Research suggests their mechanism of action includes modulation of the pituitary-adrenal gland axis. Adaptogens increase resistance against external stressors, have a balancing effect and stabilize normal body functions.Ashwagandha has been shown to increase stress resistance, improve memory-related performance, and protect against stress-induced responses such as anxiety, and physiological imbalances, according to numerous animal studies and several human studies. Well-controlled clinical studies are needed to further confirm ashwagandha 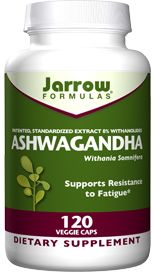 17.95
Jarrow Formulas
Be the first to tell us your thoughts.Add your testimonial

Asked on: April 7, 2013
Question: How long does a bottle last if being used as recommended

ashwagandha resistance ayurvedic adaptogens, physiological adaptogenic herbals planetary, our pituitary induced rejuvenating
1. Statements and claims on Seacoast.com have not been evaluated by the FDA and are not intended to treat or diagnose any ailment or disease.