Migranalief is a comprehensive formula featuring ingredients clinically demonstrated to reduce the frequency and severity of occasional headaches. The ingredients are thought to work by relieving smooth muscle spasms, preventing blood vessel constriction, increasing serotonin levels, and supporting a healthy response to inflammation.

Developed based on a thorough review of the scientific evidence, NutraOrigin's Migranalief, includes only ingredients with documented efficacy and safety, and contains no artificial colors, flavors or preservatives.

Suggested use: Divide daily dose intake evenly with major meals. Consume immediately after meal or during the meal with a full glass of water (8oz). Consult with your doctor or healthcare practitioner before starting any nutritional dietary supplement program.

23.77
Natural Factors
Be the first to tell us your thoughts.Add your testimonial 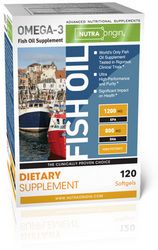 migranalief headaches occasional constriction, butterbur feverfew spasms frequency, formula divide diminished review
1. Statements and claims on Seacoast.com have not been evaluated by the FDA and are not intended to treat or diagnose any ailment or disease.